Interview With The Marshal 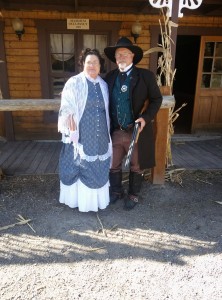 We sat down with our resident Marshal  and asked him a few questions about what the Marshal Service does.

AWHC: What is the difference between a Marshal and a Sheriff?

Marshal: A Marshal upholds the law on a nation wide scale and a Sheriff enforces local law.

AWHC: What role did the Marshals play in the expansion of the West?

Marshal: As the nation expanded westward, the US Marshals were the only Federal Law Enforcement organization in the territories. Once a town was established the people would elect a Sheriff.

AWHC: What jurisdiction did Marshals have?

Marshal: The Marshals have jurisdiction nation wide which allowed them to implement manhunts across state lines.

AWHC: Who are some of the more famous Marshals?

AWHC: Are there still Marshals around today?

Marshal: Yes, they enforce the federal laws as well as countless other tasks.

AWHC: When did the Marshals start?

Marshal:  1789 by George Washington with the First Congress.